Ancaps
Communities Topics Log In Sign Up
Sign In
Hot
All Posts
Settings
Win uses cookies, which are essential for the site to function. We don't want your data, nor do we share it with anyone. I accept.
DEFAULT COMMUNITIES • All General AskWin Funny Technology Animals Sports Gaming DIY Health Positive Privacy
2 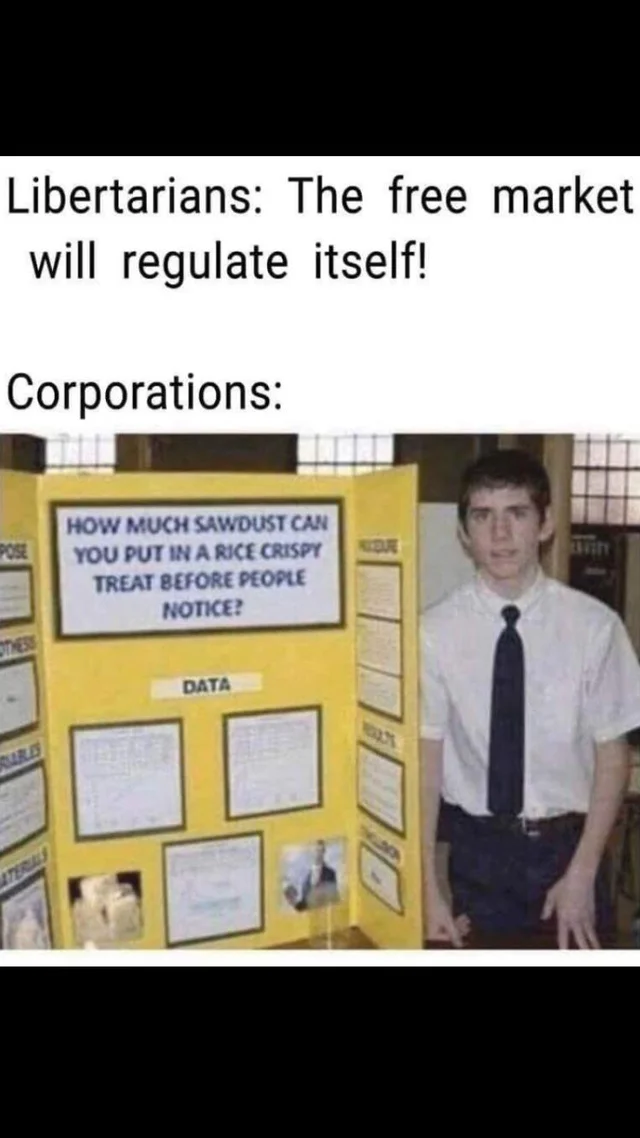 Not attacking you guys at all. Found this meme on another community. How does an anarcho capitalistic society prevent this?

making listing all ingredients and in the ratios they are in would be one good way. Bromides are added to flour in the USA (illegal in many other countries), but the USA doesn't make companies list that. Many bottles of "100% honey" contain large percentages of corn syrup, yet they aren't fined or shut down. Shark meat (which is high in mercury) is sold as scallop meat. Products made in Chinese political-prisoner labor camps are sold all over the USA in large amounts - even though it is against our law. Laws need to be enforced to mean anything. They aren't enforced.

There are multiple layers of response to such "problems". (if society actually considers them problems) In this example, the high numbered items are less likely to happen than the lower numbered items.

I probably missed a ton of options. With the State, there may be faster or stronger responses against improper behavior, but there is still a limited set of possible responses. Without a State, the sky is the limit.

Brilliant. So, a justice system under ancap is similar to insurance?

Yes it is thought to mainly revolve around liability for (not) following explicit and implied contracts or for endangering others. Pretty much like tort law today but with parallel court systems, where the contract decides where cases will be heard, like in an arbitration clause.

And I totally forgot to directly answer the meme's "before people notice". Organizations like the USDA or accredited organic certifiers like NSF would basically be insurance companies and their investigation services. Respectable suppliers wouldn't operate without certification. So they would have regular inspections like they do today.