Ancaps
Communities Topics Log In Sign Up
Sign In
Hot
All Posts
Settings
Win uses cookies, which are essential for the site to function. We don't want your data, nor do we share it with anyone. I accept.
DEFAULT COMMUNITIES • All General AskWin Funny Technology Animals Sports Gaming DIY Health Positive Privacy
7 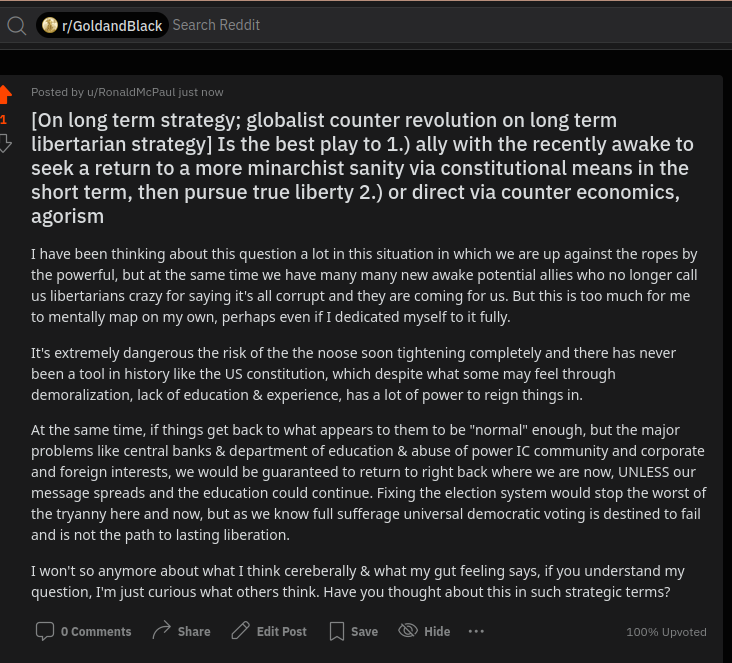 Start decentralizing and try to convince conservatives to go along with it. You need to band together with like-minded people and work within the US state and two party framework to act as a shield against the feds. No lone wolves, no third parties. This means move to possibly receptive states like Oregon, Texas, and Florida, and take over the GOP apparatus there. (only mentioning Oregon because of the Greater Idaho initiative) Take advantage of the current anti-fed mistrust to get state legislatures to pass laws towards parallel infrastructure, replacing and ignoring federal mandates, and planning what would happen in the event of secession. For example if TX were to secede tomorrow, would they be able to maintain the electrical grid? Can your governor decouple the NatGuard and order them to block federal LEOs? Will he? Can you elect someone who would? (possibly violating the National Guard Act) People could also openly start militia groups, but that's going to draw attention right now so you want to get state authority on board first.

There won't be any need to actually secede. Just keep using state power to go your own way, only poking the bear when necessary. At some point in the future a Fort Sumter scenario might occur, but it might not. You need to find local officials who have the courage to say "no". No to federal enforcers, no to courts, no to federal funding. The courts just gave themselves the power to interpret the Constitution, so take that power back.

NO. every major socialist move in the US was under Republican control. 19thA, being the big one. Take over the GOP, then you lose most recently gold&black pilled person to thinking they are safe. until the next putsch. and around it goes. The media and social media have to be completely eliminated for your idea to even have a remote chance. Nice try, Mitt.

say "no" to federal government

Yes I really must have sounded like an elitist Republicuck there. You caught me. :P

Seriously though I advocate a peaceful divorce. Let them attack us. It's not perfect, but I'm trying to answer the OP's question. What is your proposal?

Do you have a realistic plan, or like many Ancaps do you talk about an idealistic future but provide no path to get there?

There’s a lot of pipe dreams and not enough plumbing to show for it. Even the Libertarian Party went crazy without clear vision.

Well the Libertarian party is controlled oppo so that didn't surprise me. I would not be surprised if they are run by the CIA. The Mises caucus has some great ideas, but a third party just can't work in the USA. Since Bull Moose the uniparty has deeply embedded itself into the machine of government.

You need to learn the methods and the history and the techniques. it works. Then you won't get demoralized.